The most famous representatives of Russian folk art are the „Matryoshkas“ The first Russian “Matryoshka” appeared at the end of the 19th century. For over 100 years, this famous “doll-in-the-doll” is hand carved from the wood of the lime tree. It is hand painted and covered with varnish by highly trained talented Russian artists. History tells the story of the first “Matryoshka” was made in 1895 by the artist S.V. Maljutin according to a model, which a Russian countess had brought back from a trip to Japan. He named this nestling dolls “Matryoshka”, which is an abreviation of “Matryona”. This name was the most popular female name among Russian farmers of the time. It was derived from the Latin word “Mater”, which means “Mother”. In 1900 the Russian “Matryoshka” took part in the World Exhibition in Paris where it got a medal and became internationally known. The first foreign orders were made and from then on “Matryoshka” became famous around the world.

The dolls nestled inside one another are a symbol for the generations and the unity within the family. In former times they were made in a very simple way by parents for their children. But today the “Matryoshkas” belong to highly desirable collectible items. Because of their unique character and their roots in the old tradition of Russian folk art and last but not least because of their manifold appearances of different designs, the “Matryoshkas” are in great demand by art-lovers around the world. Whilst there are many Thousands of the more simple “Souvenir-Matryoshkas”, which are still painted today by Russian farmers, the high-class “Collectors Matryoshkas” are made by graduate artists in very small editions. But nevertheless the basic technique of “Matryoshka” making has remained unchanged for more than 100 years.

With our “HERMANN Matryoshka Bear” we want to present imaginatively a new artistic creation of “Matryoshkas” and to set this old Russian folk art in relation to our Teddy Bears. Our „Matryoshka Bear“ is a 3-pieces high-class collectible „Matryoshka-Set“, containing one big original “Matryoshka” single doll, which can be opened, one small original “Matryoshka” single doll, which cannot be opened and our HERMANN Teddy Bear. Both “Matryoshka” dolls were designed exclusively for HERMANN-Coburg by Russian artists according to the design of our “HERMANN Matryoshka Mohair Bear”. They are hand carved from the wood of the lime tree. They are hand painted and covered with vanish by high-grade talented Russian artist, who live deep in the Russian countryside, in a region about 1.500 km away from St. Petersburg. One artist needs about one week to paint five of our “HERMANN Matryoshkas”.

Because of the individual hand painting, each of our “Matryoshkas” is an individual item. There does not exist any two dolls, which are completely the same. No doll looks exactly like the other. Of course, the artists paint the dolls according to the given design, but the individuality is in the hand of the artist. Therefore the dolls vary in colours and in positioning the design onto the doll. This means that each “Matryoshka” is completely original. Each of the big “Matryoshka” single dolls is signed by the single artist on the bottom of the doll. In the same way like our mohair Bear, the big wooden doll is marked at its neck with our HERMANN-Coburg metal “neck mark” too.

Our „HERMANN Matryoshka Bear“ starts a new series, which will show Teddy Bears in typical appearances within world-wide different cultures. 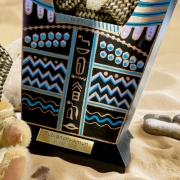 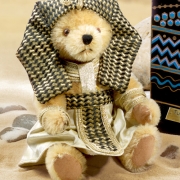 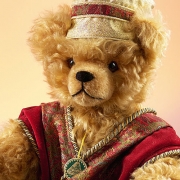 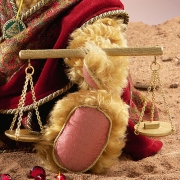