This is a natural plush material, which is used traditionally for making Teddy Bears. “Mohair”, which means “fabric made of goat hairs”, descends from the hairs of the Angora goat. Mohair is very hard wearing. Its silky brightness makes mohair one of the most valuable fibers that nature has to offer.

This is a very rare and a most valuable natural plush material, which is also used for making very special artist Bears. The Alpacca fibers descend from the hair of the Alpacca animal. Because there are only a very small number of these animals remaining in the world, this natural fabric is traded only at the highest prices.

This is a man made plush material, which was developed in the Thirties. Artificial silk was used for making Teddy Bears especially in the Forties and Fifties. Because this original artificial silk material can no longer be made because of technical reasons, Teddy Bears made of artificial silk enjoy the highest response.

This is a fabric material, which is traditionally used for making the Teddy Bear’s paws.

This is a natural material, which is used in former times to stuff soft Teddy Bears. The Kapok fibers descends from the fruit of the tropical Kapok tree. Today Kapok is no longer used to stuff Teddy Bears.

Granulated materials made of polyester, steel, glass or others

This is a modern filling material for Teddy Bears, which is mainly used for some special artist Bears.

These are hand made Teddy Bear eyes made of glass material, which are traditionally used. They must be drawn into the Bear’s head by handwork. Because glass eyes do not conform with the European safety standards for toys, glass eyes are only used sporadically for very high valuable collectible Teddy Bears.

These are eyes made of plastic material, which can be riveted into the head of a Teddy Bear. Because of the European safety standards, safety eyes are predominantly used for the production Teddy Bear today.

Other Voices for Teddy Bears

In addition to growlers there are also music voices and others, which can be built into a traditional Teddy Bear, so that the Bear can make a variety sounds.

Please enter the article no. from our catalogue. 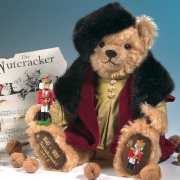