Our timeless classics base on a Teddy design, which was developed by ourgrandfather, Max Hermann, in the late 1920s to lead out his then still youngcompany from the global economic crisis with new, creative ideas. It wasa then new Teddy creation, the "Teddy Bear with inserted snout". In thisdesign, the Bear snout is made of a short-pile mohair. The snout is cutseparately and sewn on to the head cutting of the bear. Later our in 1920established company became known and famous with this kind of design. Eventoday - almost 100 years later - this Teddy Bear style is the preferred Bearshaping in our house. Like no other design, the "Teddy Bear with insertedsnout" is associated with our name and has wrote history as a timeless HERMANNclassic with which already our parents and grandparents grew up.

Our timeless classics are handmade in Coburg / Germany at the location ofour company. They are made of high quality mohair, are 5-times jointed andhave a classic growler voice up from a size of 35 cm (13 ¾ inches).Our timeless classics are traditionally stuffed with excelsior. Teddys stuffedwith excelsior belong today to the rare treasures of the Teddy Bear worldand are barely offered on the market. What once belonged to the daily craftsof Bear makers has become art. Only very old and traditional companies stillmaster today the very time-consuming work of excelsior stuffing. When stuffingwith excelsior, the final and expressive shape of a Bear is individuallymodeled by muscle power, but also by a lot of sensitivity and an artisticunderstanding of design. The more than 100-year history of the Teddy Bearhas shown that excelsior stuffed Teddy Bears survived for generations.

For almost 100 years we maintain the tradition of excelsior stuffing andwe have preserved for us this old craftsmanship for making nearly all ofour Teddy Bears. This makes the Teddy Bears of our company to unique creaturesand to real collectibles which are second to none.

Teddy Bears stuffed with excelsior belong to the rarity treasure of the TeddyBear world and are only rarely offered on the collector’s market today.What used to be the daily work of the Teddy Bear makers in former times,has become a valuable and rare treasure today. Worldwide there are only ahandful of experts who are still familiar with the traditonal art of excelsiorstuffing. Years of training, muscle strength and an artistic sense for stylingare necessary to carry out this very time-consuming work. Only very old andlong-standing manufactures have still the knowledge today, how Teddy Bearscan be stuffed with excelsior according to old example, so that nowadaysexcelsior stuffed Teddy Bears are hardly to find.

For almost 100 years, we have cultivated the tradition of stuffing our TeddyBears with excelsior and we have preserved for us this knowledge untill today.This gives our Teddy Bears their exceptional value and makes them to uncomparableand unique creatures with value-preserving character.

Mohair is made from one of nature`s finest&nbsp sources for natural fiber, the Angora goat. This special fur is very long and naturally wavy. When sheared (this usually occurs twice a year) it is called mohair. The term "mohair" is derived from the Arabian word "Muhayar" which literally means "the fabric of goat hair". Despite the name similarity there is no relation to the Angora rabbit.

The fur of the Angora go at is naturally white, curly and shiny. Its fibers have a remarkable strength when made into a pile fabric. These characteristics together with the noble appearance, silky feel and sheen make mohair one of the finest&nbsp fibers offered by nature. 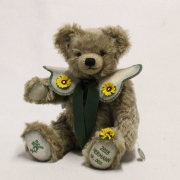 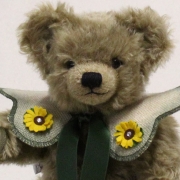 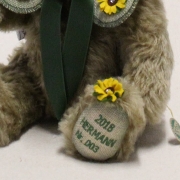